Disclosure: This post may contain affiliate links. I receive a small commission at no cost to you when you make a purchase using my link. See my full Disclosure Policy here.

As I shared in a previous post, when my cousin and his family were here my cousin’s son made donuts for us.  Oh they were good!  He inspired me to give donut-making a try.  However, I wanted to try to make a healthier version that would not only satisfy our love for donuts, but be better for us at the same time.  This recipe is what I came up with…and they were SO good!  I do want to note that I used my own ground hard white wheat flour in this recipe.  Fresh ground wheat flour is different than store-bought flour in that it seems to produce much lighter bread.  I just wanted to warn you that if you use all whole wheat flour from the store, the donuts may be a bit on the heavy side.  If so, just use a combination of whole wheat flour and unbleached white flour.  This should give you a lighter texture for your donuts.

I also used coconut oil to fry the donuts in.  You can use whatever oil you prefer, but I chose coconut oil for its health benefits.  Hint:  Once I was done frying the donuts, I let the oil cool a bit and then poured it into a wide-mouth canning jar to cool.  Once it cooled, I put a lid and rim on it and put it on my shelf to re-use the next time I make donuts!  No wasting the coconut oil! 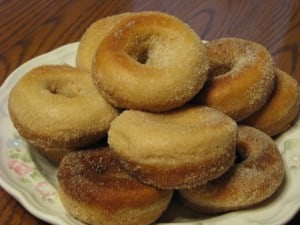 1.  In your Bosch or heavy-duty mixer (with dough hook attachment), place the warm water, olive oil, honey, salt, lemon juice, flour, and yeast.  Start the mixer and immediately add in another cup of flour.  Keep adding flour until the dough doesn’t stick to the sides of the bowl (you want the dough to be a bit sticky).  Knead on Speed 2 for about 7-8 minutes.

2.  Remove dough from mixer and roll out on a greased surface to about 1/2-inch thick.  Cut out donuts and donut holes with a cutter and place on a greased cookie sheet or cutting board.  Cover with a clean dish towel and allow to raise for about an hour.

3.  Heat oil in a large skillet over medium heat until hot.  Once donuts are raised, fry in oil until each side is nicely browned.  You can fry several at the same time, depending on how big your pan is.  Once browned, remove from oil with a fork and place on paper towels on your counter to cool a bit.  Then start the next batch of donuts browning in the oil.

4.  Mix up a batch of cinnamon-sugar (make the sugar as cinnamony as you like it!) and pour it into a paper lunch sack.  While the donuts are still warm, drop them into the bag, close at the top, and shake to coat with sugar.  Remove from the bag and place on a serving plate or tray.

5.  These are best served immediately (but do warm up nicely as left-overs!).

Check out some of my recipe ebooks!